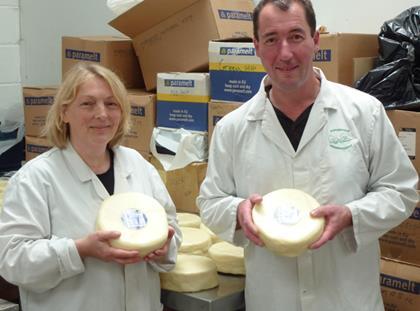 What’s your story? “Not many people know that there are two cheesemakers in Hawes – there’s the Wallace and Grommit people (we are friends!) and then there is us,” says cheesemaker Iona Hill.

“We were founded in 1978 by my uncle, Iain Hill who specialised in goat cheese, and I took on the business in 2007. In my uncle’s day, he imported a semi-soft goat Gouda from Holland, but about 18 months ago, we took the decision to bring this in-house and make it ourselves, which has recently resulted in us more than doubling our production. ”

Why is your cheese a regional gem? “Because we are a small, Yorkshire-based three-person artisan cheesemaker specialising in goats cheese. We’re doing our best to innovate, make new products and support local farmers. We process around 180,000 litres of goat milk a year, which is a fair bit for a tiny firm like ours, and we desperately need more goat milk!”

The Grocer says: We were really taken with Ribblesdale’s entrepreneurial spirit – taking their best-selling cheese in-house was a risky decision, but it’s paid off and it’s great they’ve been able to ramp up their support for local farmers as a result. We liked Superior Goat’s striking pearly-white colour and its well-rounded flavour, which didn’t stray too far into overt “goat-ness”. We’re rather glad to have nicked this one back off the Dutch.