British Cheese Production on the Rise 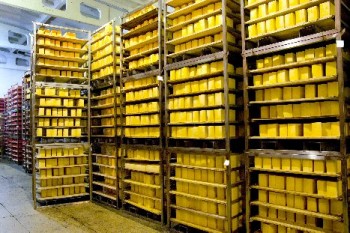 This year has seen the highest level of cheese production in Britain since 2002, with 397,000 tonnes being produced in the 12 months up to July

Production increased by 15,000 tonnes, an increase of 3.8% on 2011. The main reason behind the rise in production is believed to be due to increased exports of cheese, which were 4.7% higher than the previous year.

Imports of Cheddar have also been decreasing since 2009 because of the increased value of butter and powdered milk products. This pushes dairy producers outside the UK to focus on dairy products other than cheese to increase profits.

However, experts have predicted that the droughts affecting US farmers will have a worldwide affect on the dairy industry, because of the decrease in the amount of cattle feed. This may rise prices of production in the future.

Iona’s comment: none of us like price rises, but I feel certain that there will be a tremendous hike in the price of cheese in 2013.  I say this from experience because we are now paying 12p per litre more for our goat milk than we were a year ago and this translates into an additional cost of £1.20 per kg of cheese produced.  There is also a major shortage of goat milk and also cow’s milk and I do not see this situation improving.  Feed prices have shot through the roof, partly due to our horrendous summer where crops that were used to feed animals gave very poor yields thus causing a shortage of feed, leading to sharp price hikes; add this to a general decline in the number of goat and cow milk farmers, I think is going to lead to difficult times for the UK dairy industry.