There is an article in the online version of the Grocer, but it will not let me copy and paste – how very wise – so here is an article from the Guardian that starts off in what I hope is a tongue in cheek kind of way.  But before that….

This is the time of year when the goats kid and goat milk is scarce.  Lack of supply is exacerbated by the weather, so, for example, goats like most of us, do not like the snow and cold.  The Guardian points to an increase in demand for goat cheese and difficulty in obtaining milk as the supply is ‘sewn up’ – this is so true.  I reckon (this is a guesstimate, based on my knowledge of goat milk availability) that between them, St Helens and what was Delamere probably have control over about 96% of all goat milk in the UK.   One factor which isn’t discussed much is that the large processors cannot get enough local milk resulting in the need to import it, particularly from Holland, where producer numbers, especially at the smaller end of the scale, have fallen because of low prices and rising costs together with the latest disease to affect goats: Q Fever.  The Guardian also cites a European reduction in demand for soft cheese such as chevre, something I have not heard before.  Everyone is saying that goat cheese production should be back to normal in April and I am sure this will happen.  As for us, the tiniest of all tiny goat cheese specialists, we do have milk and we also have cheese, so fear not, the Ribblesdale Cheese cold room is fully stocked.

This is the Guardian article: Why are supplies of chèvre running so low, and whatever will vegetarians eat until the situation is resolved? 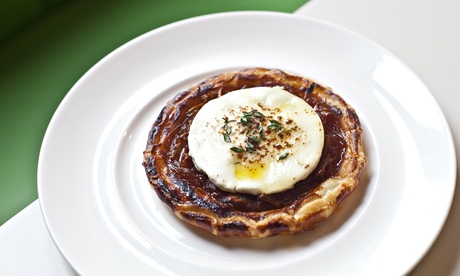 Stockpile the chèvre and bulk-buy the rosary ash: there’s a goat’s cheese shortage. Warnings have been circulating for months, but now restaurants and retailers are reporting supply problems. Pizza Express isrunning low on goat’s cheese in some of its branches and while supermarkets haven’t run out of goat’s cheese yet, some are anticipating problems: “there may be some supply issues as we move into February,”a Co-op spokesperson told The Grocer. “Cheese producers are telling me they’re finding it hard to get goat’s milk,” says John Farrand, managing director, Guild of Fine Food, which runs the World Cheese Awards. How did we get here, and how long will goat’s cheese lovers and gastropubs have to cope without their favourite fromage?

“It’s a perfect storm of rising demand and falling production, in both the UK and Europe,” says Mike Hind, marketing manager at St Helen’s Farm. “There’s been a steady increase in demand for fresh goat’s milk, primarily from people realising they might be having digestive issues with cow’s milk.” Demand for the milk has a knock-on effect for the cheese, particularly as “the UK is not self-sufficient in goat’s milk”. Things were made worse here in the UK because of the poor weather last winter, which lead to lower production, says Hind. The growing popularity of goat’s cheese means more producers are getting into the sector, “but finding it hard to get milk as established producers have the supply sewn up,” says Farrand.

To meet demand, some British producers import goat’s milk from the continent, but it’s there where shortages are really beginning to bite. Production is down across Europe, particularly in France, where some goat farmers have quit the industry because of low prices, and Holland, which is yet to fully recover from a 2010 cull to prevent the spread of Q fever. Couple decreased production with Europe-wide demand for soft French chèvres in particular, and the fact that goat’s milk production is naturally lower in the winter et voila: un shortage. “On an industry level, we’re aware that in some cases demand is outstripping supply, particularly for French goat’s cheese,” says Chris Dawson, cheese buyer at Waitrose.

Industry experts predict that the great goat’s cheese shortage of 2014 will last until around April. In the meantime, British goat’s cheeses seem to be more easily available than soft French ones: “We stock such an extensive range of British goat’s cheese, that we’ve maintained good availability.” says Waitrose’s Dawson. “We’ve been able to keep up with demand as we make a hard goat’s cheese like a cheddar, and the majority of the market is for soft goat’s cheeses,” says Hind.

Without soft chèvre, what will chefs offer vegetarian diners? “As bad as the shortage is for farmers, it might be a nice thing for vegetarians who’ll finally get a bit of variation when they’re eating out or round people’s houses,” says food writer Alice Hart, author of Vegetarian. “Goat’s cheese became a stock vegetarian dish in the 1990s, around the same time that balsamic vinegar and sun-dried tomatoes were huge,” says Hart. “Delia has a lot to answer for with those caramelised red onion and goat’s cheese tarts that ended up on every menu.” In the States, goat’s cheese found its champion in Alice Waters, who sparked a craze for salads topped with baked chèvre in the 1980s.  Both goat’s cheese tarts and salads are still menu fixtures in restaurants and pubs across Britain. Hart would like to see chefs move away from the cheese and create more inventive vegetarian options: “Thai salads, vegetarian summer rolls – something with a bit of pep to it.” If the goat’s cheese shortage lasts much longer, they may be forced to.