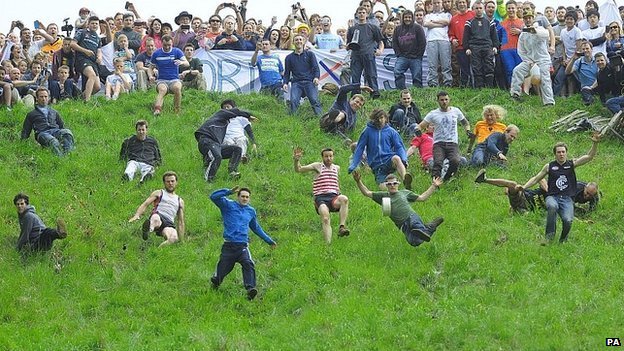 Thousands of people gathered in Gloucestershire for the traditional cheese-rolling races on Cooper’s Hill.

An estimated 5,000 people turned out to watch thrill-seekers chase a 3.5kg (8lb) wheel of double Gloucester cheese down the 1:2 gradient hill.

The winner of the first race, Josh Shepherd, said he was “really happy” but “doesn’t really like cheese”.

Last year, in a bid to make the race safer, revellers had to chase a foam imitation of a double Gloucester 200m (656ft) down the hill at Brockworth.

But this year, the fake fromage was binned in favour of a real wheel of cheese.

‘Roll with the flow’

The winner of the first race, unemployed Josh Shepherd, 19 – from Brockworth, Gloucester – said he was “really proud” of himself.

“I’ve run quite a few times before but it is the first time I’ve won,” he said.

“My tactic was to stay on my feet and go as fast as I can and roll with the flow.

This year real cheese was back on the menu, as Laura Jones reports

“But I don’t know what I’m going to do with the cheese. I don’t really like cheese unless it’s melted, cheese on toast maybe.”

The second race was won by another local man, Ryan Fairley, 24, from Brockworth, who said his tactic was “just to go”.

“I didn’t do the first race this year but it’s absolutely brilliant to have won,” he said.

The women’s race was won for the third year running by Lucy Townsend, 17, from Brockworth.

The tradition dates back to at least the early 19th Century.

In 2009, the official event was axed after more than 15,000 people turned up, sparking safety fears over numbers at the site.

Every year since then unofficial races have been organised during the late spring bank holiday by local enthusiasts.

This year, Gloucestershire County Council closed roads up to 2.5 miles ( 4km) around the slope to keep disruption for residents to a minimum.